Reno, NV – For dozens of needy families, homeless children, military families and veterans the holidays will be a bit brighter this year thanks to Sierra Neurosurgery Group’s Team Brain Power. This special division of Santa’s workshop located at 85 Kirman in Reno, Nevada contributed $4,000 in gifts and contributions to those in need this holiday season.

Among the groups benefiting from Team Brain Power’s holiday giving are the families of five local REMSA medics and members of the Nevada National Guard deployed to Afghanistan this a fall. Brain Power provided gifts for each member of the family.

Gifts were also collected for a group known as Michael’s Kids. Organized by the owner of Michael’s Deli on S. Virginia along with local attorneys and the Court System, the children are identified as living in 4th Street Motels or at local shelters. Brain Power shopped for gifts on their wish list and delivered wrapped presents.

In addition to performing charitable work throughout the year, Team Brain Power works to make Sierra Neurosurgery Group the best possible place to work for its employees. 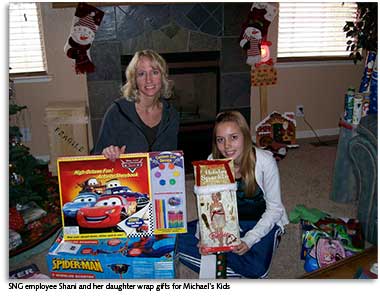