Reno, NV – Sierra Neurosurgery Group was among a diverse group of 57 Northern Nevada employers named as a finalist in the second annual “Greater Reno-Tahoe Best Places to Work” Awards. The finalists were chosen from nearly 120 companies that were nominated based on employee satisfaction surveys and meeting the award program requirements. Winners will be announced at The Greater Reno-Tahoe Best Places to Work Awards reception on Thursday, April 30, 2009 from 5:30 p.m. to 7:30 p.m. at the Atlantis Casino Resort Spa.

Sierra Neurosurgery Group was nominated in the small company (15-50 employees) category. One winning company will be chosen from each category based on scores from confidential employee surveys that are objectively analyzed by Quantum Workplace, the exclusive research partner for Best Places to Work Awards nationwide. Surveys focus on ten criteria including: team effectiveness, trust with coworkers, individual contributions, manager effectiveness, feeling valued and people practices, among others. Awards for 2nd and 3rd place in each category will also be presented. EDAWN, the Reno Gazette-Journal and the Northern Nevada Human Resources Association co-sponsor the program and awards. 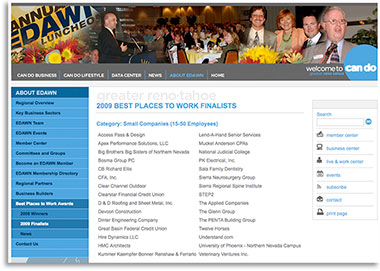 Sierra Neurosurgery Group’s top priority continues to be the health and safety of our patients, our team members and our community.

With that in mind, we have developed precautionary measures in our office and implemented changes to our surgical scheduling process because of COVID-19.