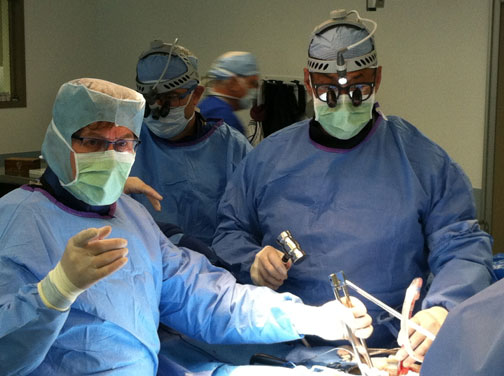 Artificial disc replacement can be used for either cervical or lumbar discs. The two surgeries Dr. Morgan performed with Dr. Bertagnoli were artificial lumbar disc replacements. The patients were a young man and woman suffering from degenerative disc disease.

Dr. Morgan has been performing artificial disc replacements surgeries since 2007. He received training from Dr. Bertagnoli–who has trained over 2,500 surgeons and performed the surgery over 5000 times–in 2007 and 2011.

Dr. Jay K. Morgan is a Board Certified Neurosurgeon who has been in practice with Sierra Neurosurgery Group since 1993. Dr. Morgan’s specialties include complex spine disorders and cerebral vascular disease, as well as artificial lumbar disc replacement. For over 30 years, Sierra Neurosurgery Group has been the leading neurosurgical practice in northern Nevada offering patient-focused care tailored to the individual.