The Centers for Disease Control and Prevention (CDC) and the Food and Drug Administration (FDA) are currently coordinating a multistate investigation of fungal meningitis among patients who received an epidural steroid injection (ESI) with a potentially contaminated product. Several of these patients also suffered strokes that are believed to have resulted from their infection.

On September 18, 2012, the Tennessee Department of Health was notified of a patient with culture-confirmed Aspergillus fumigatus meningitis following ESI at a Tennessee ambulatory surgical center. Subsequent outreach demonstrated additional patients with clinicallydiagnosed meningitis in Tennessee and North Carolina, Michigan, Ohio, Virginia, Minnesota, Indiana, Maryland and Florida. Symptoms of meningitis, including headache, stiff neck, and fatigue, developed within one to four weeks post-injection. Several patients have developed additional focal neurological deficits due to stroke in the base of the brain or brainstem.

The total number of cases has increased to 64 people in nine states. Although vials of the contaminated steroid were shipped to one facility in Southern Nevada, there have not been any cases of meningitis reported in Nevada. Below is a map of states affected by the outbreak.

Below is a map of states that received contaminated steroids. 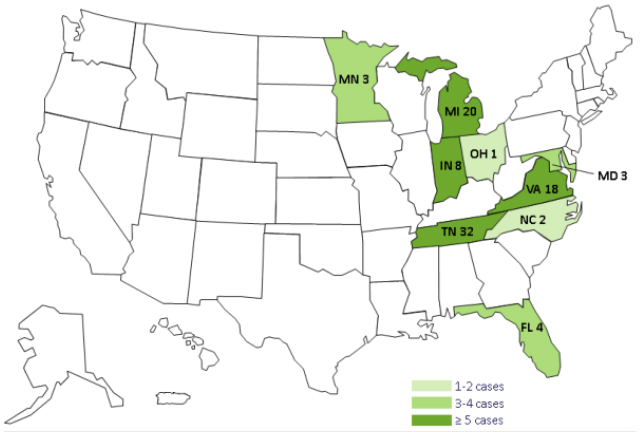 How Does Someone Get Aspergillosis?

Aspergillus is common in the environment, so most people breathe in the fungal spores every day. It is probably impossible to completely avoid breathing in some Aspergillus spores. For people with healthy immune systems, this does not cause harm, and the immune system is able to get rid of the spores. But for people with weakened immune systems, breathing in Aspergillus spores can lead to infection. Studies have shown that invasive aspergillosis can occur during building renovation or construction. Outbreaks of Aspergillus skin infections have been traced to contaminated biomedical devices. Aspergillosis cannot be spread from person to person or between people and animals.

State and local health departments are asked to disseminate this advisory widely to appropriate clinicians in their respective jurisdictions, including emergency room and infectious disease physicians. Public health officials who learn of suspected cases of clinical meningitis, other neurologic infection (i.e. epidural abscess, spinal osteomyelitis, etc.) or cerebrovascular accident with symptom onset within 1 month of epidural injection since July 1 2012, are asked to notify the state health departments and contact Rachel Smith at CDC: vih9@cdc.gov / 404-639-7738.

The New England Compounding Center (NECC) conducted a voluntary recall of 3 lots of Methylprednisolone (PF) 80mg/ml Injection produced at NECC. The lot numbers of this product are:

NECC has also voluntarily expanded its recall to include all products currently in circulation that were compounded at and distributed from its facility in Framingham, Massachusetts.

Information obtained for this blog was taken from the following websites: