Drew Simpson Teaches Teens: Use your Mind to Protect your Body! 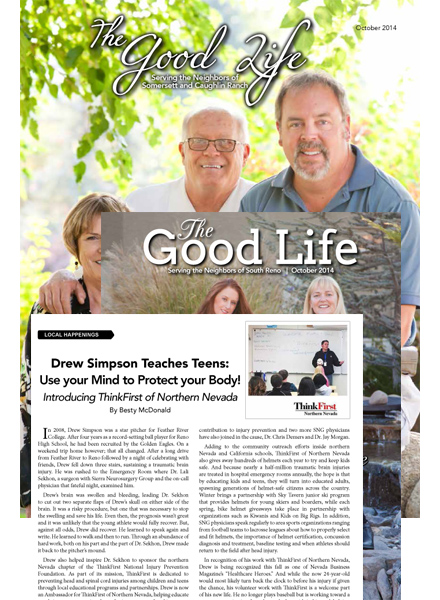 In 2008, Drew Simpson was a star pitcher for Feather River College. After four years as a record-setting ball player for Reno High School, he had been recruited by the Golden Eagles. On a weekend trip home however; that all changed. After a long drive from Feather River to Reno followed by a night of celebrating with friends, Drew fell down three stairs, sustaining a traumatic brain injury. He was rushed to the Emergency Room where Dr. Lali Sekhon, a surgeon with Sierra Neurosurgery Group and the on-call physician that fateful night, examined him.

Drew’s brain was swollen and bleeding, leading Dr. Sekhon to cut out two separate flaps of Drew’s skull on either side of the brain. It was a risky procedure, but one that was necessary to stop the swelling and save his life. Even then, the prognosis wasn’t great and it was unlikely that the young athlete would fully recover. But, against all odds, Drew did recover. He learned to speak again and write. He learned to walk and then to run. Through an abundance of hard work, both on his part and the part of Dr. Sekhon, Drew made it back to the pitcher’s mound.

Drew also helped inspire Dr. Sekhon to sponsor the northern Nevada chapter of the ThinkFirst National Injury Prevention Foundation. As part of its mission, ThinkFirst is dedicated to preventing head and spinal cord injuries among children and teens through local educational programs and partnerships. Drew is now an Ambassador for ThinkFirst of Northern Nevada, helping educate youth in our community about the importance of making smart decisions and wearing helmets when playing sports, skateboarding, cycling, skiing and snowboarding. He spends a significant amount of time visiting local schools to help spread the message to “Use your mind to protect your body.” In April 2013, Dr. Sekhon was named Physician Sponsor of the Year for his outstanding commitment and contribution to injury prevention and two more SNG physicians have also joined in the cause, Dr. Chris Demers and Dr. Jay Morgan.

Adding to the community outreach efforts inside northern Nevada and California schools, ThinkFirst of Northern Nevada also gives away hundreds of helmets each year to try and keep kids safe. And because nearly a half-million traumatic brain injuries are treated in hospital emergency rooms annually, the hope is that by educating kids and teens, they will turn into educated adults, spawning generations of helmet-safe citizens across the country. Winter brings a partnership with Sky Tavern junior ski program that provides helmets for young skiers and boarders, while each spring, bike helmet giveaways take place in partnership with organizations such as Kiwanis and Kids on Big Rigs. In addition, SNG physicians speak regularly to area sports organizations ranging from football teams to lacrosse leagues about how to properly select and fit helmets, the importance of helmet certification, concussion diagnosis and treatment, baseline testing and when athletes should return to the field after head injury.

In recognition of his work with ThinkFirst of Northern Nevada, Drew is being recognized this fall as one of Nevada Business Magazine’s “Healthcare Heroes.” And while the now 24-year old would most likely turn back the clock to before his injury if given the chance, his volunteer work with ThinkFirst is a welcome part of his new life. He no longer plays baseball but is working toward a career as a motivational speaker and takes pride in his work helping others.

“Dr. Sekhon gave me a second chance at life and I have every intention of living it to the fullest,” said Drew. “Working with ThinkFirst of Northern Nevada is a huge part of that and I’m honored to be given the chance to help others make smart choices.”