Your brain is pretty incredible. It functions like a central computer, orchestrating our movement, allowing us to have thoughts, and even controlling our basic functions like breathing, temperature, and being awake. Being soft, it is enclosed in the hard bone of the skull for protection. Unfortunately, your brain is still very susceptible to injury. It is estimated that over 2.5 million people visit the Emergency room every year due to head injury, resulting in over 50,000 deaths per year. On average, 138 people in the United States die each day from injuries that include a head injury (1). 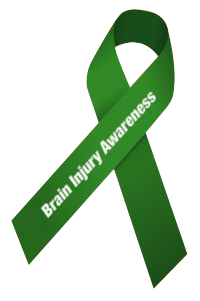 Some types of injury are obvious, such as a gunshot to the head or being struck on the head with enough force to fracture the skull. Many injuries are not obvious. Sudden deceleration, as occurs with motor vehicle accidents or falls, are a major cause of injury. The brain is suspended in fluid, the cerebrospinal fluid, which acts as a shock absorber. Rapid velocity changes “sloshes” the brain forward, backward, and sideways. This may bruise the brain as it collides with the skull (a contusion), or tear a blood vessel on the surface of the brain resulting in a blood clot on the brain surface (subdural or epidural hematoma). Rapid movement of the brain may also shear the fragile connections between the neurons and other cells. This type of injury may not be visible on imaging, but often can be catastrophic or fatal.

The most common causes of brain injury are falls (40%), being struck by/against something (15.5%), motor vehicle accidents (14.3%), and assaults (10.7%). Nineteen percent of the time the cause is unknown. Falls account for over half of injuries in those under 14 years of age, and 81% of injuries in those over 65. Motor vehicle accidents, assaults, gunshot, and being struck is most common in young adults (1).

An often overlooked cause of injury is sports. In 2009, 446,788 sport related injuries were treated in US Emergency rooms. The vast majority were concussions, but serious, and even fatal, injuries are not uncommon. The most common activity resulting in injury was bicycling. Football, baseball/softball, water sports, and motorized recreational vehicles, round out the top five. Bicycle accidents alone accounted for over 85,000 head injuries, resulting in approximately 600 deaths. While approximately 50% of children own a helmet, less than 25% actually wear one. It is estimated that wearing a helmet would prevent at least 45,000 head injuries! (2) Free bike helmets and helmet fittings can be obtained from ThinkFirst of Northern Nevada. To date, over 2,000 helmets have been given away in Northern Nevada. (3)

So with the weather warming up, it is time for many to get outside and be more active. Remember to always wear a helmet when biking, riding recreational vehicles like ATVs, or playing football. If you have difficulty with balance, you can still enjoy the trails, don’t be hesitant to use a cane or walker. Just remember, have fun, but safety first!